But there are a few differences between the two. For one, DFA is a for-profit corporation, while Vanguard operates at cost and exists solely for the benefit of its customers. For another, Vanguard funds can be purchased directly by investors, while DFA funds are only available through financial advisors.
They also have somewhat different investment approaches.

Vanguard investors typically follow a strategy of buying and holding the entire stock market at the lowest possible cost. “It’s impossible to outperform the market consistently,” this philosophy goes, “so we’ll just try to capture the full return of it.” While Vanguard does offer active and other non-total market funds, its largest funds, and the ones it chooses to include in its Target retirement portfolios, reflect this total market philosophy.

DFA, while also subscribing to the low cost passive model, employs a number of strategies it claims will produce better results for shareholders than simple indexing. These include:

So, does the DFA approach give them an edge over simple indexing? In the past, it was hard to tell. DFA advisors would invest customer money in a number of its 28 funds, each capturing different bits of their strategy. It was difficult to determine, from its scattered (and often overlapping) individual funds, how a DFA portfolio as a whole might perform.

Almost a decade ago, however, DFA launched a product incorporating its entire philosophy into a single investment. On December 30, 2005, the DFA US Vector Equity Portfolio (DFVEX) was born. No longer would DFA advisors have to buy a large number of funds and rebalance among them, possibly incurring capital gains taxes along the way. The Vector fund was all you needed.

We now have 9 years of real world data on this investment. This is also recent data, a fact especially important in the case of DFA, which was a tiny fund family for most of its 30 year existence. Even a decade ago, it was only about 10% the size it is now. Since many of its strategies (such as buying smaller and less liquid stocks) become harder to execute as fund size grows, data from the distant past may not be relevant today. An example of these growing pains may be seen in the rebranding of its original fund, DFSCX, from “small cap” to “micro cap”, and creating new “small cap” funds holding larger stocks.

To be clear, DFVEX covers only the US stock market. Vanguard investors have a similar all-in-one US stock investment, the Vanguard Total Stock Market fund, VTSAX. Unlike the many active strategies DFA uses, VTSAX holds stocks purely based on their size, or market cap. The bigger the stock, the more it holds. VTSAX employs no sophisticated market beating strategies. It just sits there.

Now, on to the comparisons.

Let’s get the big one out of the way. Which fund has done better for shareholders? (Data updated in 2019)

As we’d expect, these funds have had very similar returns, since they both broadly cover the US stock market. In this chart from Morningstar, we see that a $10,000 investment in each fund since DFVEX’s inception resulted in a gain of $17,923 for DFA, and $23,338 for Vanguard.

Of course, that excludes the advisor fee investors using DFA advisors must pay. Here’s the growth of a $300k initial investment, with and without a 1% advisor fee: 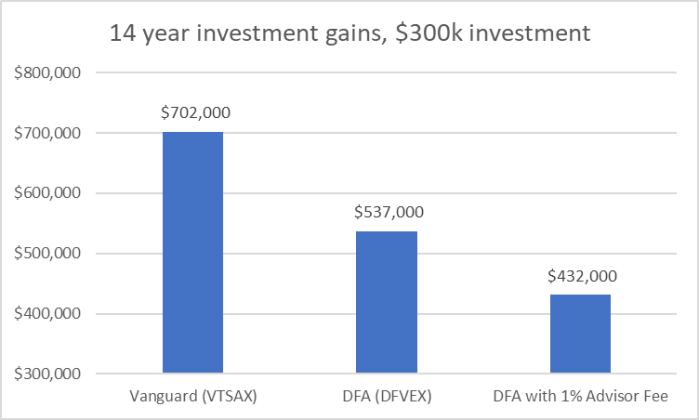 That’s a stunning difference in results.

Vanguard’s performance advantage is due in small part to its lower cost. For the pleasure of underperforming the market, DFA charges exactly 8 times the annual expense ratio of Vanguard – .04% for VTSAX versus .32% for DFVEX. With a 1% advisor fee you’re looking at not 8 times, but 33 times the annual cost of the Vanguard fund. Here’ how these costs add up with that $300k investment, over 14 years:

Those are terrifying numbers. The additional expense of the DFA option compounds dramatically over time.

Winner: Vanguard by a landslide

When comparing investments, risk must always be considered. High risk stocks, for example, have had greater returns than low risk government bonds historically, but we can’t simply declare stocks the better option, since they were also so much riskier.

DFVEX and VTSAX should have similar risk, since they’re composed of mostly the same US stocks. However, the DFA fund holds out-sized amounts of more risky parts of the market (mainly small caps). It’s also arguably less economically diversified, as it makes relatively large bets on stocks the market has assigned smaller values to.

One way to measure risk is to simply look at volatility – how much the price of the fund varies from day to day. As of November 2019, per Morning star the 10 year volatility of DFVEX is 15.9% versus 12.9% for Vanguard. The DFA fund is clearly riskier.

In the real world, this means your DFA fund is likely to fall further during the next market crash. The 2008-09 financial crisis and recession is a perfect example of this. Let’s look at how both funds behaved:

The graphic above shows that the Vanguard fund dropped 18% during the crisis, while the DFA fund dropped by 24%.  DFVEX was the riskier of the two investments.

Winner: Vanguard, any way you slice it

It’s important to note that we’re not just comparing DFA to Vanguard. VTSAX represents the US stock market itself. The real question is, then: do DFA’s strategies have any value at all? It appears from the data that the answer is no.

To be the superior investment going forward, DFVEX will not only have to outperform in absolute terms, but on a risk adjusted basis as well. Given its cost and the historical data so far, the odds of such as feat are greater than zero, but not much greater. Since DFVEX is representative of a typical DFA advisor portfolio (or at least the US stock portion of it), I believe most DFA clients should expect similar results.

17 thoughts on “Vanguard vs DFA”